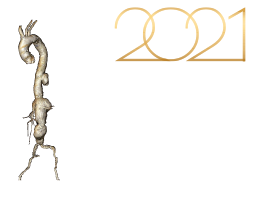 Bologna is a medieval town located in Northern Italy in the Emilia Romagna that was founded by the Etruscans and has since thrived as a popular trade and learning center. It has a population of nearly 500.000 and is home to the oldest university in the world, University of Bologna, founded in 1088.

It has all the advantages of a dynamic city, thanks largely to a large student population, yet still has a quiet and relaxed atmosphere.

Once a “city of towers” with over 100 of them dominating the skyline, today only around 20 remains.

The Asinelli and Garisenda Towers, known collectively as the “Two Towers” now take pride of place in the centre of the Old Town. Asinelli, the tallest at nearly 100 metres, has 498 steps that may be climbed to get to the top. The Garisenda, much smaller at 47 metres is showing some signs of subsidence and taking on some of the attributes of the Leaning Tower of Pisa. 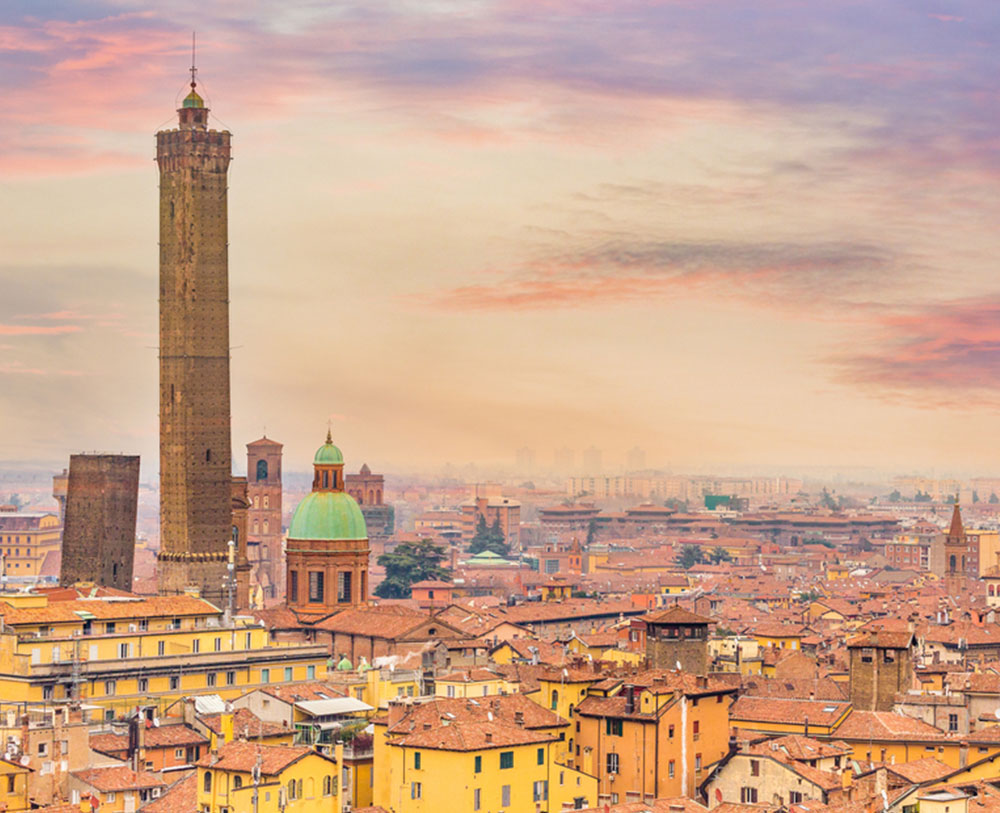 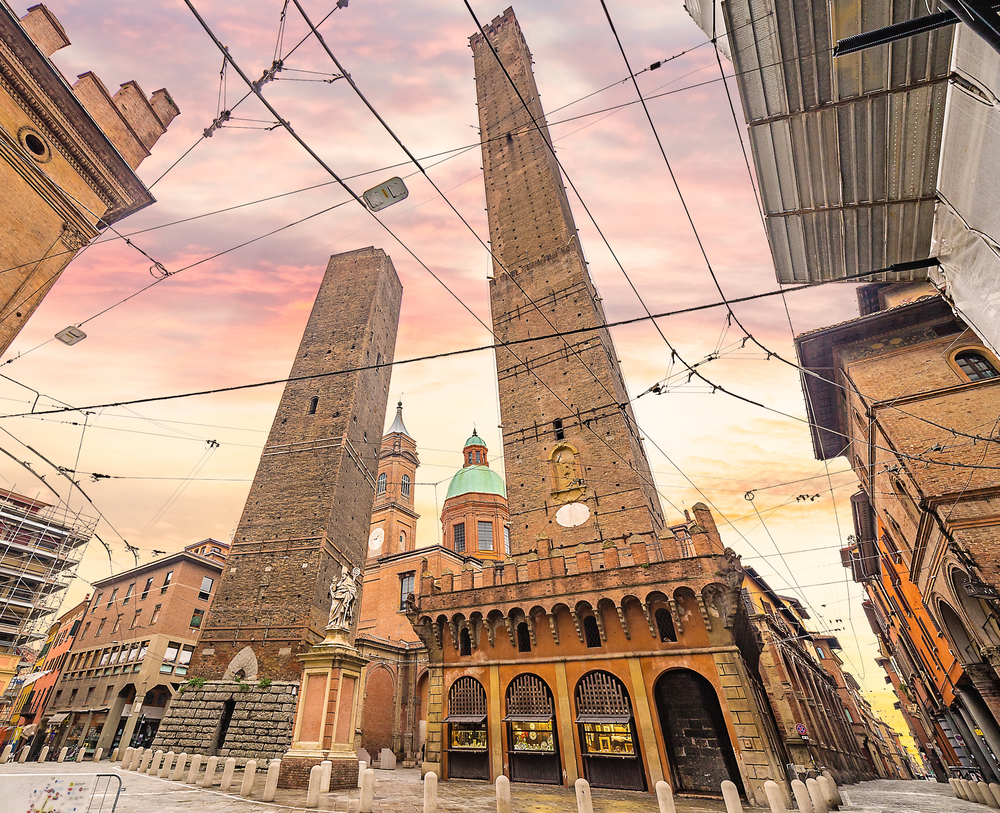 PIAZZA MAGGIORE AND FOUNTAIN OF NEPTUNE 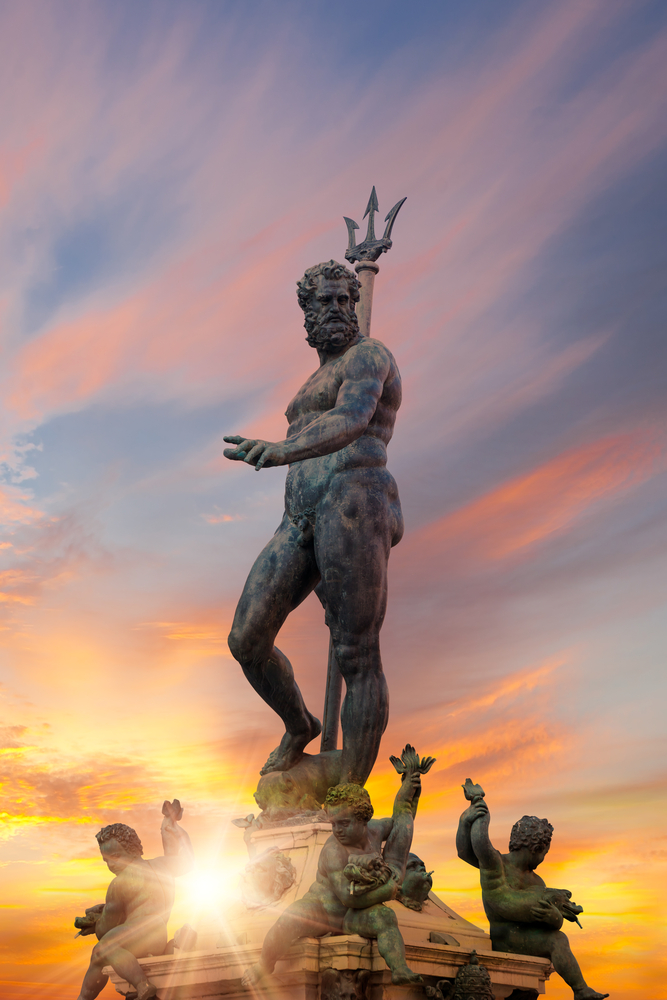 Piazza Maggiore is located in the very centre of Bologna. In the past, the square underwent many changes and was embellished with important buildings: the Basilica di San Petronio, Palazzo dei Notai, Palazzo d’Accursio, Palazzo del Podestà and Palazzo dei Bianchi.

It was built where there once was just a grassy area. In 1200, the Municipality started purchasing houses and land to build a square that would homage the importance of the city and gather all city activities (commerce, trade and various kinds of services) at the same time.

Just around the corner, there is Fontana del Nettuno (Fountain of Neptune) built between 1563 and 1566 by the Flemish sculptor Giambologna.

It is a symbol of the power of the Pope: he ruled the world like Neptune ruled the seas. At the feet of the statue there are four little angels.
They represent the rivers of the four discovered continents at that time: Ganges, Nile, Amazon River and Danube.

Stroll the 666 portici in Bologna, or covered terracotta arcades. With an influx of university students it needed to expand rapidly. No one wanted to expand outside the city so they build on top of the streets, student houses were created in front of existing storefronts with the portices below. They needed to be high enough to allow horse carts through and today over 45 km remain, which are fantastic for the hot Italian sun or rainy days. 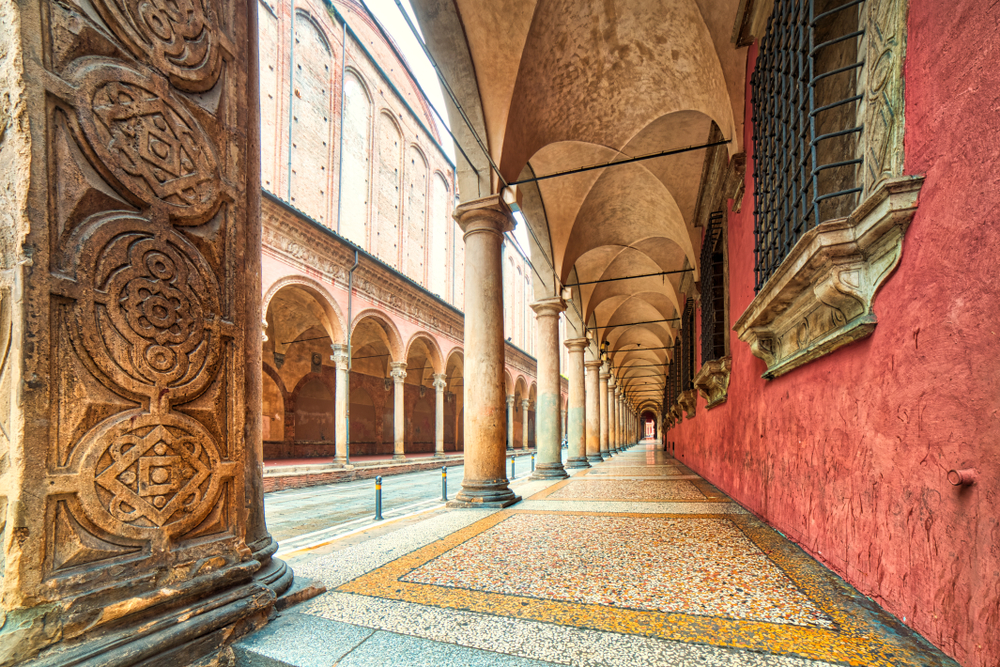 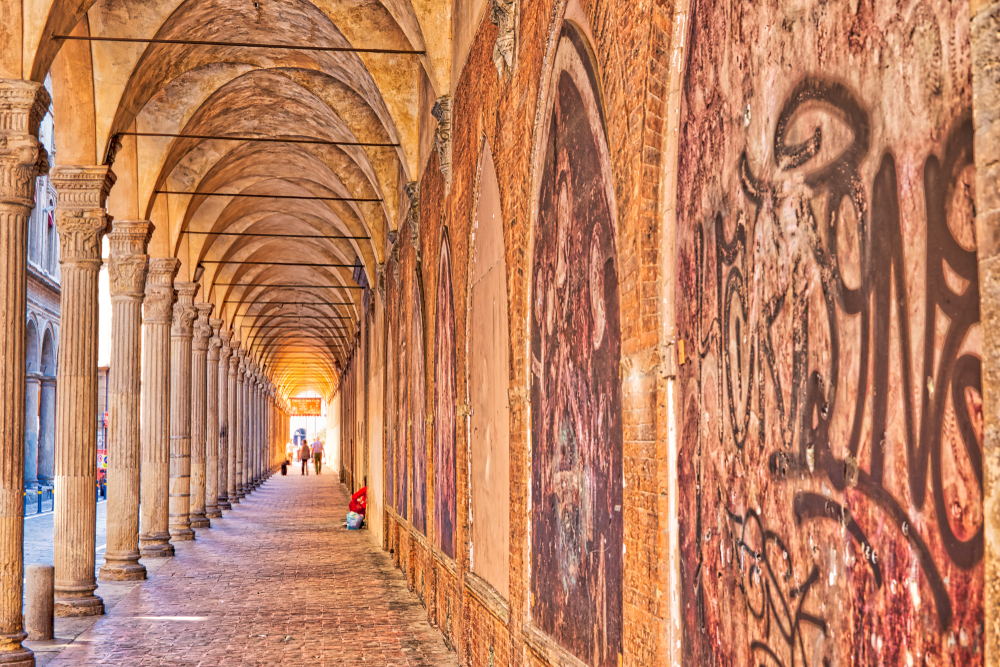 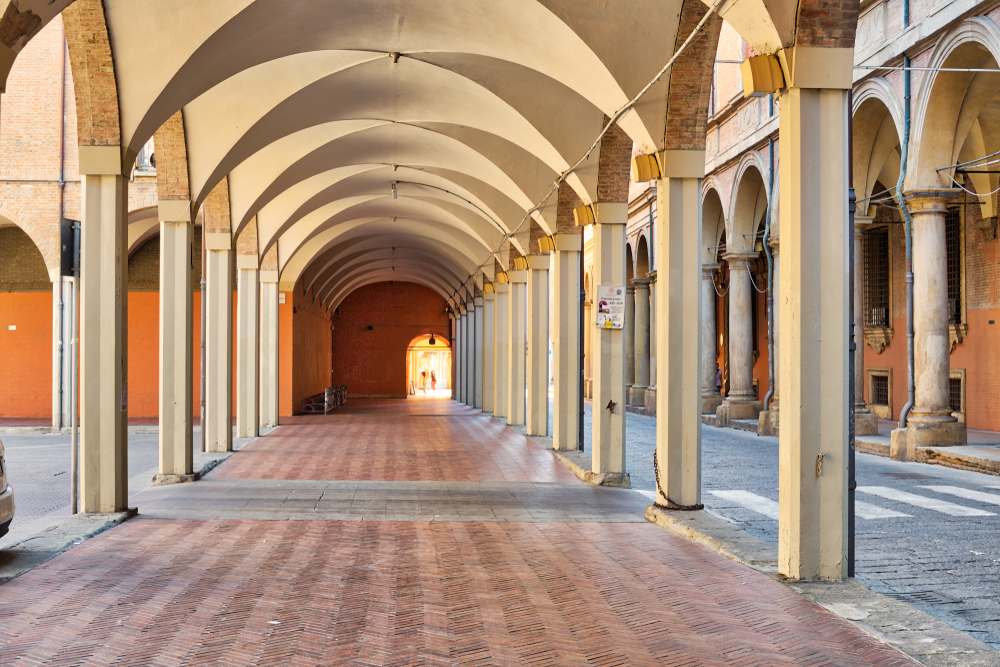 Piazza Santo Stefano is one of the most peculiar places in Bologna. Even though it is mainly considered as a square, it is not properly this: Via Santo Stefano widens to create this peculiar area that leads to the monumental group of buildings named after the same Saint. From Piazza Santo Stefano the ancient road to Tuscany may be taken. This group of churches is mainly known as “seven churches” as it is formed by seven holy buindings built and renovated during different periods, mainly on behalf of the patron Saint of Bologna, St. Petronio.

At present, the square is often used to host cultural events and concerts. 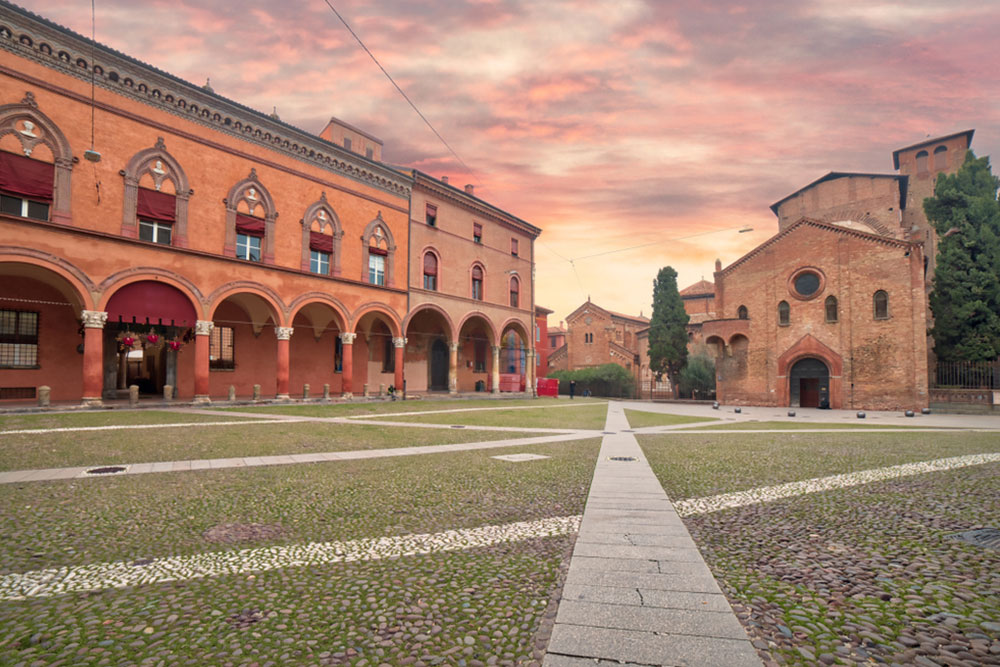 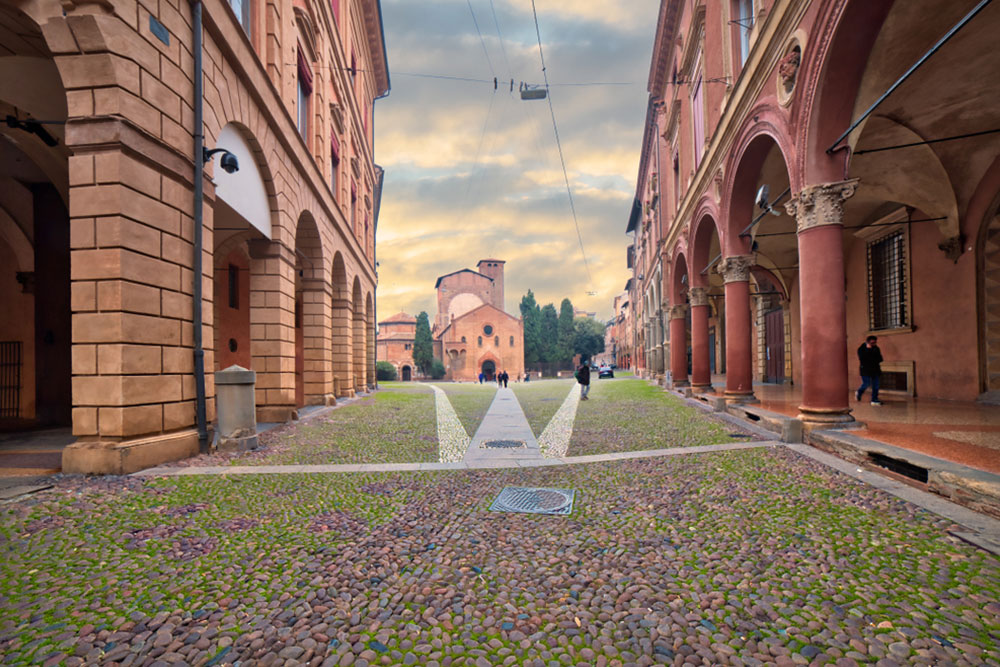 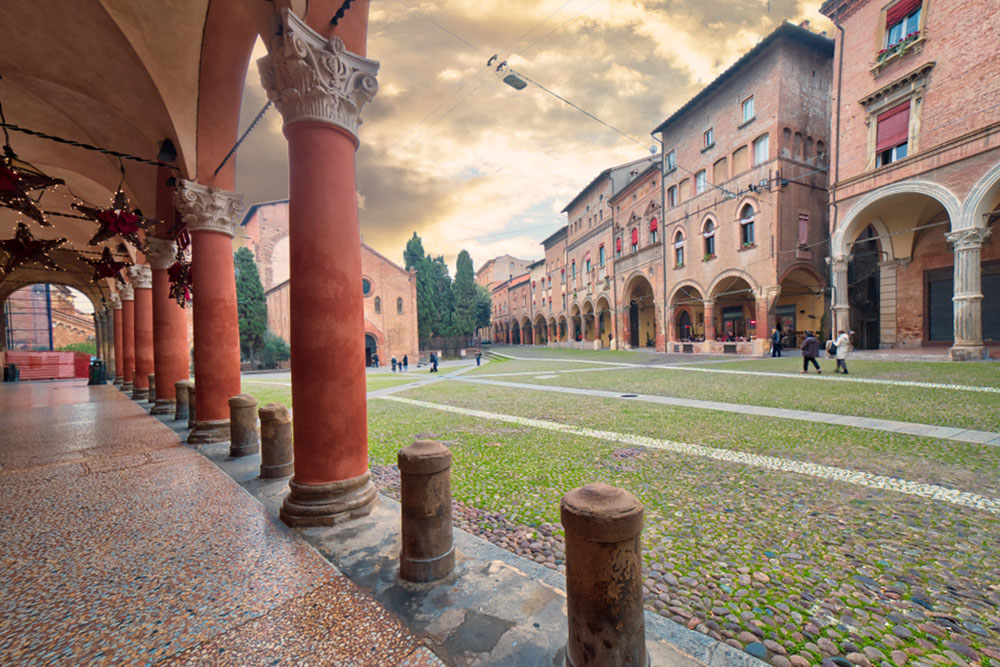 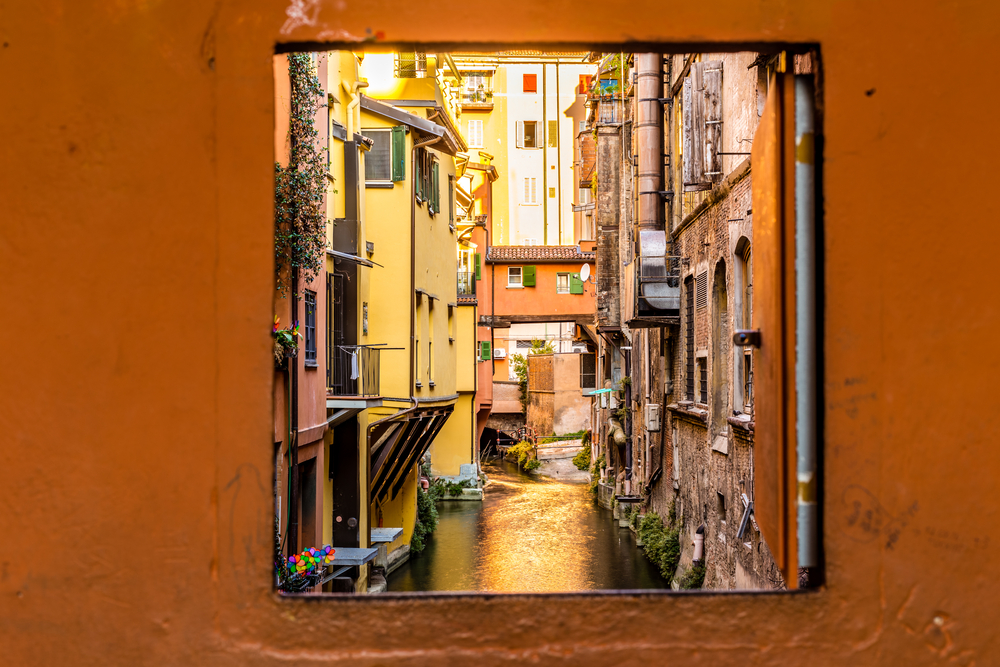 Bologna was once a canal city, with open canals visible up until about two centuries ago. Time has seen them built over or at least covered from view.

Passing under the Porta Govese or Torresotto dei Piella you reach the famous window on the Canale delle Moline and the bridge, both overlooking the canal.

This corner of the city is known as “little Venice”. Looking out among the buildings, you can see one of the few stretches of running water, which was not covered with asphalt between the beginning of the twentieth century and the postwar period.